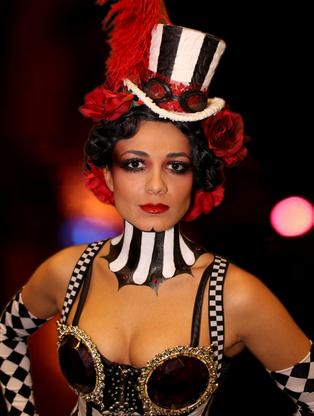 PAINTERTAINMENT were asked to create a Night Circus Themed Strolling Table to serve cupcakes to the evenings Patrons, as is the custom with 'Night Circus' performers a touch of red was added and made part of the characteristic BLACK & WHITE costume.

PAINTERTAINMENT's over creation for the event was the Living Ballerina Statue, unlike the Black and White characters, the Living Statue was meant to trick and create uncertainty amongst the patrons, a visual illusion. . . ,